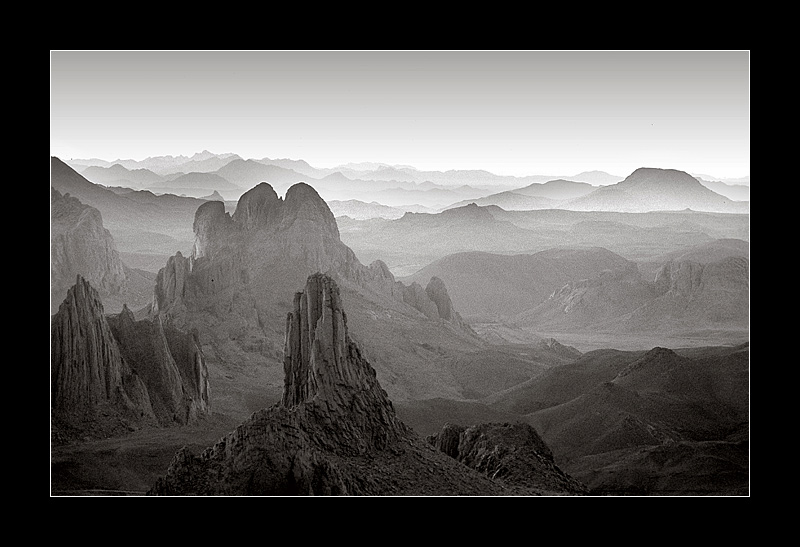 In the photograph you can see the Hoggar mountain range (Algeria). Many years ago I went there on my motorcycle. And suddenly, one afternoon, while the sky was slowly being filled with silent white fires, I felt something extraordinary: everything around me (sky, mountains, rocks, desert, wind) was transformed into ‘someone’: ‘Someone’ with a superhuman and truly unbearable beauty -almost lethal- that was looking at me, and lets say loving me.  The whole cosmos became presence… I say ‘someone’ because I felt that ‘that’ was aware of himself. And aware of me too.

I felt something similar again two years later in Lyon (France), just walking, alone, prosaically, around the airport. Once again, suddenly, everything was ‘someone’. A presence exploded into my consciousness, an unbearable presence that, now, I can only qualify as sacred. Why sacred? Because it emanated omnipotence, feeling, closeness, attention, magic, sublimity… and love.

Now, almost thirty years later, and I do not know how many dozens of books read since then, I think I can say that those two phenomena were religious. And they were so because I felt a bond, a religation, with something great, infinitely bigger and more beautiful than me and than any imaginable thing.

By the way: That ‘thing’ told me nothing. It just was there, sublimating the whole reality, and my whole existence.

“Religion”. Another logical ballerina. Lets see how does she dance.

There are two etymological interpretations of the word “religion”. The first is based on the Latin verb religare: to tie, to bind, to link.

Link with what? Do those links really happen? Why? Can they be artificially propitiated? Can they be socially institutionalized, regulated, theorized?

The second etymological interpretation comes from the Latin word religiosus, synonymous with “religens”, which would be the opposite of “negligens”. José Ferrater Mora says in his beautiful  Dictionary of Philosophy that in this second interpretation “being religious is equivalent to being scrupulous, that is, scrupulous in the fulfillment of the duties that are imposed on the citizen in the cult of the gods of the State-City.”

1.- Kierkegaard: Fear and Trembling. Here we find the radical recommendation of jumping into the lethal, inhuman abyss of God. Religion as a lethal, annihilating link.

2.- William James [See here still in Spanish]: The Varieties of Religious Experience: A Study in Human Nature. This is a classic study on the radical human experience of God´s presence, of God´s sudden apparition.

3.- Michel Hulin [See here still in Spanish]: La mystique sauvage, PUF, Paris 1993. This is a work that deserves to be read. It studies the non-civilizational, radically private and free religious experience. It should be translated into English. Any volunteer?

And I share some philosophical reflections now, caused in my mind by the logical ballerina “Religion”:

1.- Considering a cosmos not as the totality of the existent things but as the totality of things (lets say values, relationships, structures, models of life and death and after death, possibilities) we have been told that are real (in summary, considering a cosmos as a story, as a legend we take as real and in which we believe we exist), I see too kinds of religious links: intra-cosmic and extra-cosmic: free thinking versus enslaved thinking, free love versus robotized, narrowed, civilizationally focused love.  The intra-cosmic religions might foster an auto-confinement in a dogma, in a logical/civilizational product: that link offers certainty and successfully harmonizes individual lives within human societies. It can also become a way of making money. This religiosity can be very useful, and even also healthy, but only if it is not assumed too seriously: it can easily degenerate into fanaticism (stupidity, hatred). It truly provides certainty and can even help to channel superavits of fear and envy and frustration, but it always presuppose blindness, and smallness. The extra-cosmic religious link, though, might connect us with the abyss, with the infinity, with something that expands our eyes and hearts, that pushes us to love more, to study more, to question more, to create more too. Surprisingly, we can also find this kind of open religiosity in the most powerful religions of our civilization. For instance, in Christianity we find a philosopher like Gianni Vattimo [See here still in Spanish], the creator of the “weak thought”, who affirms that to be a real Christian implies to be “a bad Cristian”. In Islam we find Ibn Arabi, Rumi, Averroes, Avicena… In Hinduism we have the Upanishads, which point out the absurdity of the sacred texts in which they are included (the Vedas) and also of any rite or ceremony. In Marxism we find Horkheimer [See here still in Spanish]. In Judaism we have the jewel of Levinas [See here still in Spanish]. Within the religion of Science we can find a man like Stephen Hawking [See here still in Spanish] thinking that, when we try to understand the origen of the universe, the ideas of Saint Augustine of Hippo have the same epistemological value as the ones of the Big Bang theory. We find this shocking ‘confession’ in his book The grand design (Bantam Books, New York 2010), written together with Leonard Modlinov:

“Model-dependent realism can provide a framework to discuss questions such as: If the world was created a finite time ago, what happened before that? An early Christian philosopher, St.Augustine (354–430), said that the answer was not that God was preparing hell for people who ask such questions, but that time was a property of the world that God created and that time did not exist before the creation, which he believed had occurred not that long ago. That is one possible model, which is favored by those who maintain that the account given in Genesis is literally true even though the world contains fossil and other evidence that makes it look much older. (Were they put there to fool us?) One can also have a different model, in which time continues back 13.7 billion years to the big bang. The model that explains the most about our present observations, including the historical and geological evidence, is the best representation we have of the past. The second model can explain the fossil and radioactive records and the fact that we receive light from galaxies millions of light-years from us, and so this model—the big bang theory—is more useful than the first. Still, neither model can be said to be more real than the other”.

2.- We could also speak of purely logical religious-links versus pure silent religious-links: religiosities derived from the spells of the goddess Vak. Here would be theism, atheism, etc. Just wars of names (or wars of Gods): “Nature”, “Life”, “Universe”, “Knowledge”, “Science”, “Human rights and dignity”, etc. All of them require the installation and updating of symbolic constructs: books, sermons, indoctrinations.

3.- The religious bond, if fully successful, triggers an irruption of energy: it is as if the ‘connected human being’, suddenly, received an energy that was not available to him until ‘the connection’. There are various energizing cosmos, various energizing religions essentially incompatible with each other in many cases. How is that possible? Perhaps it could be argued that certainty, and the end of doubts and fears, and also the feeling of being part of a closed and protected community, might give strength and peace, which altogether might trigger exceptional flows of energy inside human body and mind and whatever. Are energy and peace and certainty the ultimate goals of human existence?

4.- Philosophy, when you try to practice it seriously, must be radically empiricist: we should not be tempted to eliminate facts or sensations even though they do not fit into some of the paradigms that struggle to be the home of the whole in the whole of our mind. The religious feeling is something very serious. Very big. Too big maybe. Philosophy can nor ignore it.

5.- We also should be able to accept the possibility of the existence of a very serious, very close and loving bond with some minor god, as Salvador Paniker seems to yearn in that refreshing work that is entitled Asimetrías (Debate, Barcelona 2008). I made a book review that can be read [here].

6.- If we, with Schopenhauer [See here in German], endure the thought -and the feeling- that we are the secret directors of the theatre play of our lives, it must be possible to affirm that the religious bond would be something like a communication, a vibrating cable, set between our creative self – natura naturans, the Great Wizard-  and our created self (natura naturata).

7.- We should consider the existence of  a prodigious dreamer who, conscious and omnipotent inside his dream, inside his created dream, could love an individual person, a concrete picture, dreamed-drawn by him. Dreamed-drawn so prodigiously that the picture could also love back its dreamer, its draftsman; even if that “picture”, that creation, could not see his creator, not even successfully think or speak about him.

Inside the created world it might only be possible to feel him (I mean the Dreamer/Draftsman), and even to feel his feelings, occasionally, like I maybe did almost thirty years ago, in the mountains of Algeria.

This Philosophy blog does not have advertising or institutional support. And I don’t have the financial resources to sustain it and to develop it. However, I do have an enormous amount of ideas and philosophical projects still to be developed and communicated. For all these reasons, if you believe that the work I am offering here has value, please consider making a donation (through the “Donate” button). Your help can be decisive for the survival of this project. I give you my word.